Review: Dark Funeral – We Are The…

For the readers living under a rock. Can you introduce yourself?
Hello! I’m Ron Thal, aka ‘Bumblefoot’ (named after my solo band) Been releasing experimental punky guitar-oriented hard rock music for 20 years on my own, then crossed paths with Axl & band in 2004, joined with them in 2006. Started making music when I was six years old – 35 years later, I’m a guitarist, singer (& bassist), recording artist, years of touring with my own band and others, producer & engineer, songwriter for TV, video games & other artists, teacher, guitarist in Guns N’ Roses, and still a workaholic.

You keep the fans updated about your new album through Twitter and Facebook. Can you tell us more about the new upcoming solo- album?
I’m not gonna do an album. It’s a big investment of time, and I don’t have time. It’s the big ongoing battle in my life, finding time for everything and everyone. So I’m gonna take it a song-at-a-time, and release each digitally. I’d rather keep releases at a steady simmer than wait for a big pot to boil every few years, know what I mean? We have the technology to do it this way now, wanna give it a try… 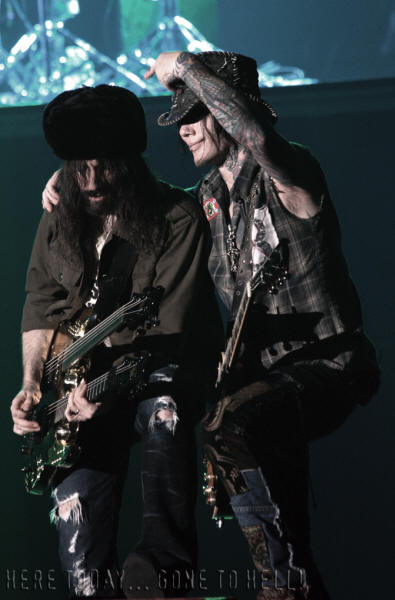 This year Ron’s Beard came alive on Twitter and Facebook, and became a instant cult-hit! Will he be a part of your new record too?
(Whispering…) The beard – it’s evil. And it’s grown. A lot. Best not to wake it or mention it…

I have seen you do a voice recording for the single “Invisible” when can we hear the full song?
‘Invisible’, yes! Next song I’m puttin’ out. When I get back from the GNR tour I’m going to take care of the final touches and release it. We’re in Abu Dhabi this week, gettin’ home before Christmas. Will keep everyone posted and updated…

Will Dennis “The Dutch Dude” again play the drums on the next record?
Absolutely. And awesomely. He’ll be on these next songs comin’ out.

You come over as a very social guy. You always got time for fans and often play with them outside the hotel. Is it hard to keep being that way. Now that you are in the famous rock-band Guns N’ Roses?
Playing in GNR, I have more of an opportunity to do things like this, it’s been good. It always happens spontaneously, fans outside a hotel, I’m walking in with a guitar, or they have one, we’re talking for a while, next thing ya know we’re all singin’ and playin’. It’s nice. It’s why I’m here. On Earth, I mean.
You’ve seen a lot of the world now and you have been with Guns N’ Roses recently in Holland are there any fun moments you wish to share with our readers?
What happens in Holland stays in Holland. Haha… fun happens everywhere, but just normal life stuff, nothing unusual. 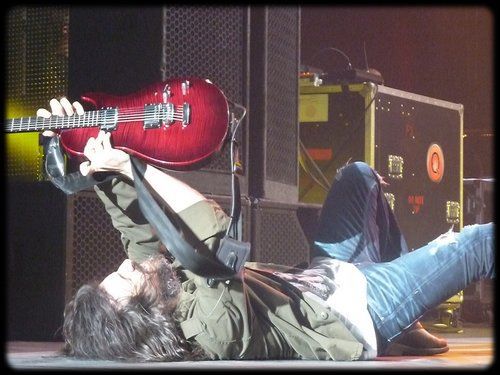 Being away from home for such a long time must be a hard thing to do. How do you keep up the good spirit and continue being on the road for that time?
My wife visits a lot – we get to see the world together, it’s great. I think Skype keeps everyone sane, fathers getting to see their families. There’s a lot of band and crew walking around with laptops in front of their faces, talking to it, everyone waving to each other through the screen as they walk by…

What is the most intense moment in your career so far?
When a tornado tore down the stage in Rio early this year, right before doors opened. Crew was pretty bruised up, and if the audience was there, we would have had a lot of deaths.

You are a “monster” on guitar, who easily throw out the most mean and difficult riffs, where did you learn to play like this?
Just happens over time, experiencing life in and out of music… that’s the key to it all, live your life to the fullest, and tell the stories with your songs.

If you had to name one inspiration for your musical career, who would that be and why?
There’s a lot – Eddie Van Halen, Jimi Hendrix, Angus Young, Ace Frehley, but I’d have to say George Martin. He was the Beatles’ producer, a classical musician, he added the instrumentation and depth to their songs – and that’s the part I love the most within the songs I love the most.

You worked as teacher on an University in the USA , don’t you miss teaching?
Very much. Was teaching music production at SUNY Purchase College, right above NYC… I miss everyone there a lot, I miss teaching a lot. In the last few years I’ve been living out of a suitcase, traveling the world, connecting with great audiences, but touring puts a halt on recording, teaching, everything else. When the touring slows down, I’d love to get back to teaching.

You performed as a guest on many records, is there still an artist you wish to collaborate with?
Other than the people I’m already workin’ with, hmmm… for me it’s about anyone who’s a cool person and doing something interesting musically. Because time is limited, I’m forced to be choosy about what I take on… would love to do something with John Sykes – we spent some time together last year jamming, and the dude’s so fucking good, so inspiring. 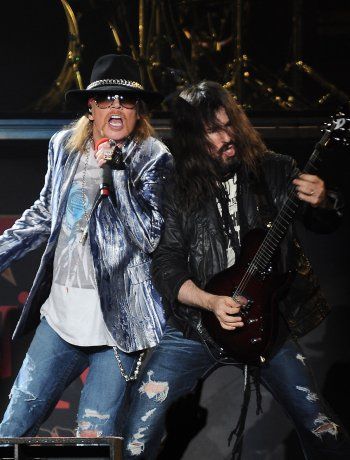 Besides making good solo-records, you also are one of the lead-guitarist in Guns N’ Roses. Is it hard to combine your solo-work with being in Guns N’ Roses?
Yes, the more we tour the less time there is for everything else. The last thing I did was put out my own ‘Abnormal’ album and acoustic ‘Barefoot’ album in 2008, while GNR’s ‘Chinese Democracy’ was in its final stages to be released. I spent most of 2009 living out of a hotel room in LA, prepping with GNR for this past year of touring – took a break over that summer and wrote & recorded a batch of my own music, toured with Lita Ford for a few months, then got back to bizz with GNR, hit the road end of ’09 and have been touring since. On breaks in-between legs of the tour I’d try to knock out whatever I could – my first album was re-released by the label that owned it and I transcribed & released a 200-page TAB book of the album, I laid some guest solos, started laying vocals to the ’09 songs I wrote (‘Invisible’ will be the first of them…), did a song for a ‘Rock Band’ style video game of rock versions of Chopin’s music, mixed Return To Earth’s new album ‘Automata’ (Metal Blade Records), mixed and mastered some other demos and albums, did work with some charities as well… just a big race against the clock all the time. I’m getting’ things done, but I definitely feel the constant impending ‘To Do’ list hovering over my head at all times, and scramble to knock down the list every free chance I get….

You are a food-addict especially when it’s spicy, What’s been the best meal you eaten this tour ?
Been so many great meals, great restaurants – one that stands out is Roka in London – best cod fish I ever tasted… 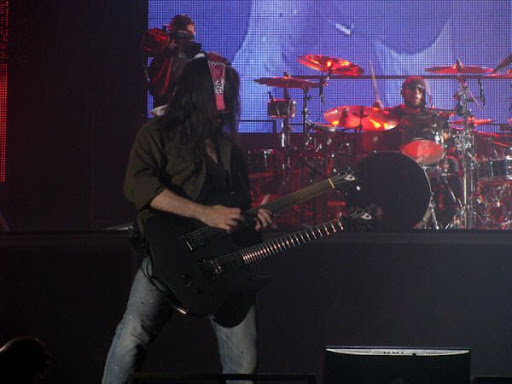 The Guns N’ Roses world tour recently will come to an end. What’s the next project you will focus on?
Don’t know what comes next, can’t predict. Ya know, ‘We make plans, and God laughs…’ GNR has some tentative touring plans, will have to see what comes of it – if not that, will keep putting out my own music, would love to get back to producing bands and teaching, and maybe finally making that instructional DVD that’s been on the ol’ list for a decade….

Thanks for this interview.
I got one final question, is there anything you wish to share with our readers?
Thank you for the interview! Thanks to all for reading… and Happy Holidays! Hope to see you all in 2011!

MERCURY FALLING – INTO THE VOID – PHONOTRAXX / ROCK INC. – OUT NOW